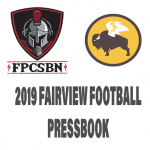 With the Fairview Warriors 2019 Football Season a day away, the Fairview Park City Schools Broadcast Network (FPCSBN) will be entering its fourth year since it was founded by network President Tyler Danburg, Andrew St. John, Chris Kaminski, and Matt Dunlap, and its third year of calling Warrior Football.

As the FPCSBN has gotten more experience, the broadcast team of Tyler Danburg and Andrew St. John will be calling the network’s most ever games in a season with 9 of the 10 games being broadcast on the FPCSBN:

As the Fairview Boys High School football season begins, meet the faces and voices of the FPCSBN, the official radio network of Fairview Warriors sports!

For the upcoming football games, the FPCSBN’s coverage will begin at 6:40 pm ET with the Hometown Threads Coaches Show, where Danburg and St. John sit down with Fairview Head Coach Dave Latkovic to discuss the team and to preview the upcoming game. Following the Coaches Show is coverage of that week’s game at 7 pm ET with a taped halftime show interviewing one of Fairview’s top players in the middle of the first and second halves

Tyler Danburg will be entering his third year as the play-by-play voice of Fairview Warriors Football. With FHS teachers Chris Kaminski and Matt Dunlap, Danburg co-founded the FPCSBN in December of 2016 and has called basketball, baseball, and football. He also serves as Fairview Athletics’ head columnist and plays on the Fairview High School Baseball and Soccer teams. Danburg also hosts a podcast called Tyler’s World The Podcast with fellow FPCSBN Broadcaster Andrew St. John. 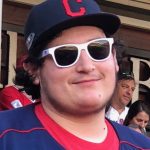 Andrew St. John is no stranger to the FPCSBN. This will be his third year with the broadcast network, and in all three he has been in the booth for football as he began as a sideline reporter for the 2017 campaign, and will head into his second as color commentator paired with Danburg. St. John has spent time with the FPCSBN calling Baseball and Basketball games in a addition to football, but is the Tony Romo of High School Football broadcasts. Andrew and Tyler Danburg created Tyler’s World The Podcast in 2017 and do the show on the side during the football season.

The FPCSBN would like to thank all of its sponsors for the 2019 Football Season:

And Buffalo Wild Wings-Fairview, the main sponsor of this seasons’s FPCSBN Pressbook

Be sure to listen to Week 1 and every week of HS Football on the FPCSBN Pres. by Buffalo Wild Wings-Fairview with Tyler Danburg and Andrew St. John on the call by clicking the link below: